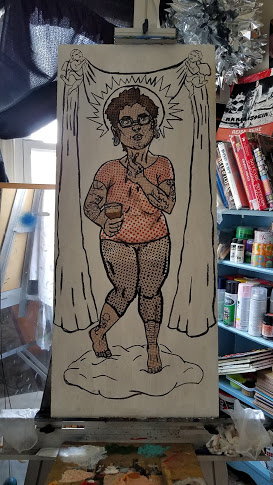 This painting was started in late February of 2019. I had been going through some old works and noticed that every few years, I do a self-portrait, if only to keep my painting-muscles limber. It seemed to me that it was becoming an interesting time-line, at least to me. With my 39th birthday approaching, I decided to do another self-portrait, this time going back to a style I’d enjoyed (much to my art professors’ chagrin) back in college, an illustrated comic-book pop-art look.

I was excited to get started and the initial idea and sketch came together quickly. I work pretty loose and fast here; I embrace the unintentional, either working with them or around them. This time, I wanted a neater look, something to hearken back to the paintings I did some 16 years ago, but to show how my skills had developed. This piece was more controlled than what I’ve been painting, and I found that a relief– I knew what I was doing and I knew what I was getting! No unintentional strokes to have to creatively work with, no stopping and mulling over what to do next! I worked with fervor.

I wanted to get this painting done by my birthday, which falls early in March. At first, such a carefully laid-out piece with a definite deadline seemed foolproof. What could possibly go wrong? Wham-bam, here’s my painting.

I completely sputtered out. It was like I used all my creative drive on it all at once, and now there is nothing left. It’s been a month and a half since I worked on it, and I have no desire to do so. Maybe the problem is that I know exactly what it will look like. It already exists in my brain, so I feel no real motivation to finish it. What I do feel, instead, is just disappointment.

Disappointment does not make a good catalyst. It seems to squash creativity. The goal of your art becomes getting rid of the disappointment instead of creating something that gives you pleasure. Bubba and I recently conversed about the self-imposed hiatuses of art we had, coincidentally, imposed on ourselves when we were in our early 20’s. For me, I felt too much pressure to create something for an audience. I couldn’t even figure out who my audience was or why they’d want to look at what I was making, let alone buy it. So I sort of froze up and stopped painting. Then I would feel guilty and disappointed in myself for not working, and I would slop some paint on a canvas. I went through the motions and created pretty mediocre junk. Then I’d feel horrible and talentless and stop painting for a while. It was a vicious, stupid cycle,. Worst of all, no one else cared one way or the other. I was just doing this to myself.

So now I stare at this self-portrait of me at 39 years old, half-finished. It has sat there, untouched, well past my birthday. Even more irritating is that no other canvas has been there in the meantime. It just sits there, reminding me every day how much I don’t want to finish it. But why should it? Just like when I was in my 20’s, no one cared. No one is looking over my shoulder, telling me I really have to finish this painting before starting another, just like no one is telling me I should paint this like this or that like that. It’s just a little devil on my shoulder, but instead of tempting me into sin, he’s just a nagging art critic hellbent on making me feel bad about myself.

While my initial goal for my 39th year was to finish this goddamned painting, I’ve changed it slightly. Now my goal is to flick that irritating little devil critic off my shoulder, put this painting away, do a different painting, maybe finish this one, maybe not. Now I’ll focus on creating what gets my juices flowing and not feeling guilty when I set aside that which does not.